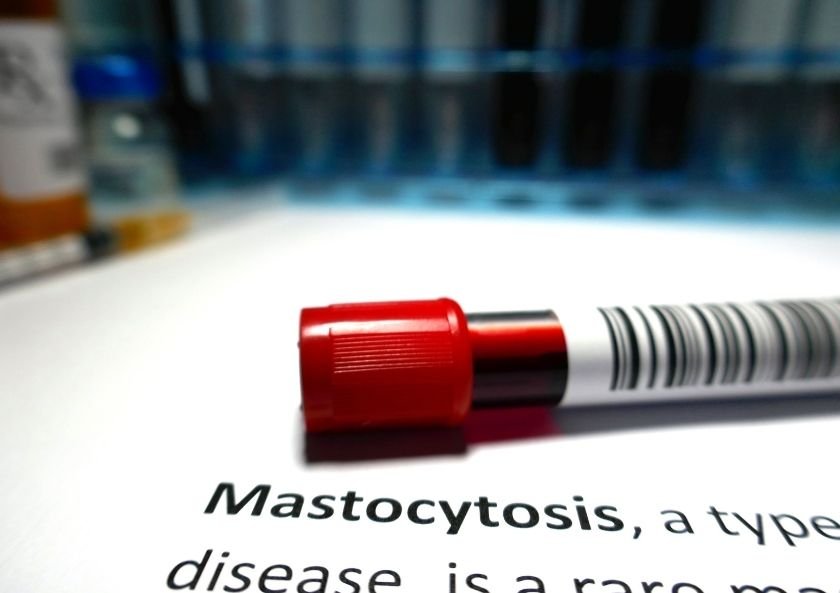 It is characterized by excessive accumulation of mast cells in the affected tissues. There is also an abnormality in the surface receptors of these accumulated cells. This abnormality in surface receptors resulting from genetic change leads to prolonged lifespan of mast cells and accumulation in tissues. There are two types that only hold the skin (cutaneous) or internal organs (systemic) such as bone marrow, liver, spleen and lymph node.

What is the frequency of mastocytosis?

It is a rare disease. There are 5-10 cases per million in the world per year. But in the US, it is seen more often at a rate one in ten thousand. Two thirds of the diagnosed cases are in childhood. Approximately 90% of mastocytosis in childhood is cutaneous, which involves only the skin.

What is the age of mastocytosis seen?

Although the disease can be seen at any age, it is frequently seen in children firstly in infancy. Then, its frequency gradually decreases, and it decreases to a minimum during early adolescence, and its frequency increases again after 15 years of age.

What are the causes of mastocytosis?

Since there are genetic changes in the disease, there may be more than one case in the same family. In other words, there is familial predisposition. There is no gender difference in children. Ethnic, socioeconomic and environmental effects have not been associated with the development of the disease.

What are the symptoms of mastocytosis?

The majority of children have only skin findings in mastocytosis. Skin mastocytosis occurs in three different ways in children. The most common form is the condition with widespread rashes called urticaria pigmentosa. Juvenile blisters called bulla can also be seen in these rashes in children under the age of three. The second most common is the condition where one or several nodules in brown-green color called mastocytoma are seen. The third and very low rate is the condition where diffuse (widespread) skin mastocytosis involves skin darkening and thickening with rashes that hold the whole body. The most important finding in these children is itching. When these rashes are rubbed, systemic findings such as itching, widespread rash, abdominal pain, diarrhea and low blood pressure may occur as a result of the increase in substances secreted from the mast cells collected there.

In very rare systemic mastocytosis in children, findings such as abnormalities in the blood table due to involvement of the internal organs, size of the liver and lymph nodes, diarrhea, and especially bee sting and intake of certain medications anaphylaxis (allergic shock) can be seen.

What should you do if your child has symptoms?

This is a rare disease with different types and can be fatal when it is systemic. Therefore, in case of such a suspicion, it will be appropriate to apply to pediatric allergy specialists who are the most experienced and knowledgeable in this regard as soon as possible. Unless necessary, do not use any medication and do not rub and scrape rashes until you go to the doctor, as they can cause a severe reaction.

What should be done when going to the doctor for mastocytosis?

It will be useful to bring with you the previous examinations, x-rays and medications used.

If the necessary analyzes and x-rays have been done before, both the diagnosis and evaluation are made faster and the re-examination is prevented.

If there is no sign of itching, do not use allergy syrups, some cough and cold medicines containing antihistamines 1 week in advance. Because in cases where skin allergy tests are necessary, these drugs should not be taken for a week.

How is mastocytosis diagnosed?

In skin mastocytosis, redness and swelling develops within a few minutes by gently rubbing or scratching the affected area. This is called the Darier sign. However, this procedure should not be performed in large lesions called mastocytoma, as this can cause a dangerous systemic reaction. In order to distinguish between systemic and skin mastocytosis; liver, spleen and lymph nodes should be examined for growth. Then, a blood test should be performed for complete blood count, liver function tests, and serum basal tryptase level. If the child is less than 1 year old and his examination and tests are normal, and if there is no systemic involvement so there is no need to perform bone marrow analysis. However, if there is an abnormality in the examination and laboratory, a bone marrow biopsy should be performed.

Is skin biopsy required for diagnosis?

The diagnosis of skin mastocytosis is mostly made by examination. But in suspicious cases, it should be done to confirm the diagnosis.

Is there a genetic analysis of mastocytosis?

In recent years, KIT D816V mutation has been found in the 17th chromosome in patients with mastocytosis. However, since it is associated with systemic mastocytosis in adults, it is is not recommended for children with skin mastocytosis today.

How should mastocytosis be treated?

As it will cause exacerbations, rubbing of the lesions, hot bath, excessive exercise, stress, and spicy foods should be avoided. In young children, fever and teething can also trigger attacks. However, these triggers should be avoided if they are found to stimulate the child’s disease.

Morphine, codeine, steroid-free pain relievers-antipyretics, radiocontrast agents, some general anesthetic drugs, antibiotics called vancomycin, some muscle relaxants, and vaccines can induce mastocytosis. Wherever is possible, it should be avoided.

Local anesthetics and antipyretic drugs containing acetaminophen can be used by most patients, it will be no problem.

What should be done in cases where it is mandatory to take drugs that are likely to stimulate mastocytosis?

Especially in children with diffuse skin mastocytosis, this possibility is higher. Before general anesthesia, radiocontrast drug use and vaccination, the patient should be evaluated by contacting the pediatric allergist. When necessary, cortisone and antihistamine drugs should be used before the procedure.

What drugs are used in the treatment?

If the child has itching and rashes, antihistamine drugs should be used. If the patient’s skin findings are widespread and serum basal tryptase level is high, it should be used for a long time as a preservative. The patients who have not fully passed the complaints and who have complaints about the digestive system, despite this treatment, H2 antihistamine drugs should be added to treatment.

Medication called oral cromoglicate can be used in patients older than 2 years who suffer from digestive system such as abdominal pain and vomiting.

In cases where the findings are resistant, leukotriene antagonist drugs, ultraviolet ray therapy and cortisone creams can be used.

Adrenaline autoinjector should be prescribed in children with diffuse skin mastocytosis and mastocytoma type disease and high levels of serum tryptase, as there is a possibility of developing anaphylaxis (allergic shock).

Are allergic diseases more common in children with mastocytosis?

How should children with mastocytosis be monitored?

Does it improve over time?

If the disease started before the age of 2 in children with skin mastocytosis, it resolves largely at the latest in adolescence. Those who start after two years of age are less likely to recover and systemic disease may develop.

Want to join the discussion?
Feel free to contribute!